Today was just one of those days when I got to the last five minutes of my last class of the day and found myself disappointed it was already over. It’s the last week of term, and whereas in England that would mean an entire week (or two) of ‘Sir, can we have a fun lesson?’ and other such pleas, there’s none of that here. It’s not that the kids aren’t vocal – they’ve been clamouring for their exam marks for weeks – it’s just that they’re less whiny. Maybe that’s a good thing that comes out of the absence of Christmas fever.

We’ve been playing Jeopardy today. I forgot how long the game can take, leaving it – as usual – to the last twenty-five minutes of the lesson. ESL Jeopardy can take as long as forty minutes, if not an hour, if the questions are stimulating enough. And it is immensely entertaining to see them show off both what they’ve learned and what they know. Though I’ve yet to have a class crack the $500 Cities question (namely: Game of Thrones’ House Lannister is based on the English House of Lancaster. House Stark is based on what northern English city?). It’s a toughie, but there’s an imaginary $500 riding on it. And it’s fun to be the game-master for a week… or even a year.

Reinette did me proud on her first spin. I wish I could say the same about me! Suffice to say that after two months of reading and writing (and let’s not even count the university years), I was probably getting ahead of myself to expect to do 45km over rough terrain on my first attempt. Not for want of trying, though! I had three alarms set within ten minutes of each other around six thirty in the morning, wolfed down a breakfast, geared up and rode out into the frozen morning.

I got as far as Ribera del Fresno, the next town, in time to watch the rising sun shine golden upon the mist. It’s easy to think that we’re in a total flatzone here in Tierra de Barros, but once you’re out in the sticks on a bike, you learn very quickly that looks are deceiving: the terrain is as marbled in elevation as it is in colour. There and back again was a good 21km, which isn’t a bad first attempt for a guy who hasn’t done any decent exercise in the best part of a year or two (give or take the odd run).

The Lycra is real, though. I think I encountered five or six other cyclists that morning, and only one wasn’t clad from head to foot in skin-tight branding. And he happened to be an old-timer in grubby blue overalls and a thick campo coat. I must have looked a little odd, riding off into the countryside in a worn Valecuatro jacket and denims. I suppose I was committing a major cycling faux-pas. Ever keen to fit in, I guess I’ll have to invest in one of those nightmarish sports-suits at some point in the near future. When I’m good enough at cycling to justify the expense, that is. 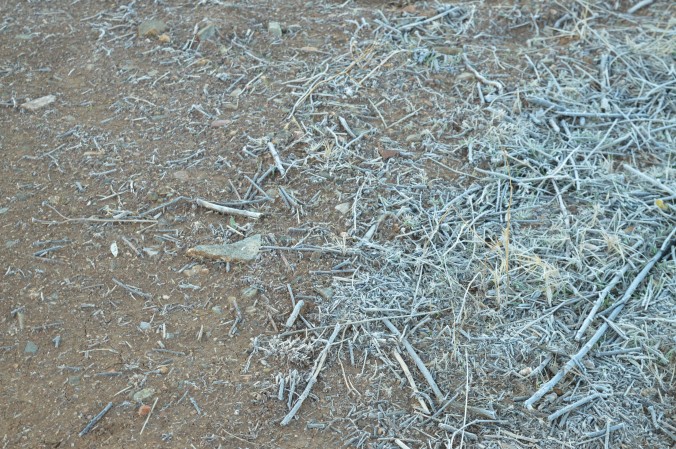 It’s been a frosty last couple of weeks. Not frost as I know it back in England – the crystalline, sparkling frost that brings out the kettles and car-scrapers – but a hard, dry frost that you only find out in the shadows of the countryside.

I stopped outside of Ribera to take a breather. I’ve become less dependent on my camera of late to record my memories, and also of my journal. I’m trying to train my memory instead. It’s such an easy thing to lose, especially when everything is at the touch of a button these days. So let me show you what I saw. Mist in the valley. A tatty sign with the word veneno daubed in big red letters. A couple of plastic bottles frozen stiff above the ground, and the white lid of a chemical tub, half filled with ice. Ravens calling somewhere far away. A kite on the wind. Cars racing down the road. A campesino stood by his van, looking out across the valley with thoughts probably not too dissimilar to my own.

This is why I cycle. Not to get fit. Not to get from A to B. It’s to get out there and see the little things. And long may it be that way. BB x