Another weekend, another adventure gone by. My weekend travel budget is capped at 90€ wherever I go, for which I’ve managed Cantabria, Lisbon and now Granada. Not bad from Extremadura. I’d like to say I’m entering economy-mode after this, for the end-of-year adventure’s sake, but that’s unlikely what with Semana Santa around the corner. So let’s just say I’m going to be even more budget-savvy than usual from now on. But that’s hardly going to stop me from going searching for more adventures.

I made a promise to a few friends from Durham to pay a visit whilst they were lodged in the gorgeous Moorish stronghold of Granada. That promise was, however, dependent on the arrival of the first snows in the high peaks of the Sierra Nevada. That little proviso caught me out, as it only began snowing in earnest around Carnaval weekend, by which point most of the Durham crew had long since left Granada for their next destination. Still, a promise is a promise and I’m a man of my word, so off I went. It just so happens that I have a couple of Spanish friends based there anyway, so I wasn’t heading for another solo weekend. 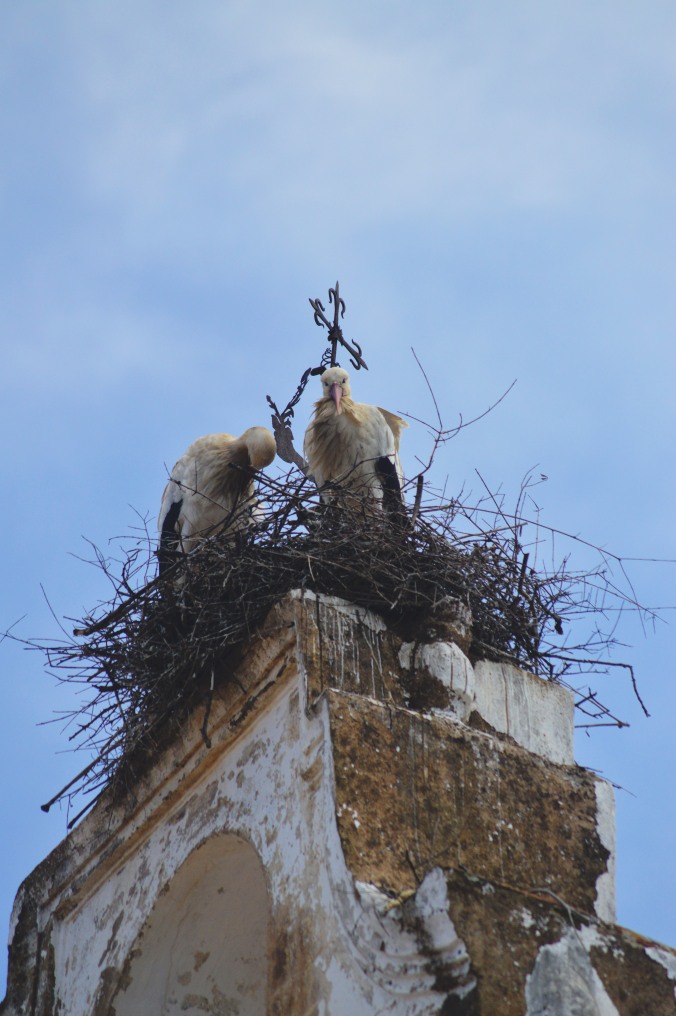 I’m now a total convert to BlaBlaCar; if not for the drastically lower price tag and journey time (16€ for a four-hour ride from Zafra to Granada is pretty fantastic) then for the conversation practice. In a funny, roundabout kind of way, I remember complaining that it was exactly this kind of taxi-practice that bothered me in Jordan. I suppose that was because it felt like the only window of opportunity at the time. Here, it’s just one of many, and I’ve made some really interesting acquaintances through the system. One day, if just for the ease of going wherever I want, I really should learn to drive.

The real boon of BlaBla’ing it to Granada was getting there in time for sunset. It was gone half past six o’clock when we got there and the sky was already a gorgeous yellowy-pink, so I had a bit of a run to the Mirador de San Nicolas to get what I – and the rest of Granada – was after: that unforgettable view of the Alhambra, surely one of the world’s most beautiful buildings, set against the backdrop of the salmon-pink snows of the Sierra Nevada. I’ve never seen the Mirador so busy, and the views explain it all. 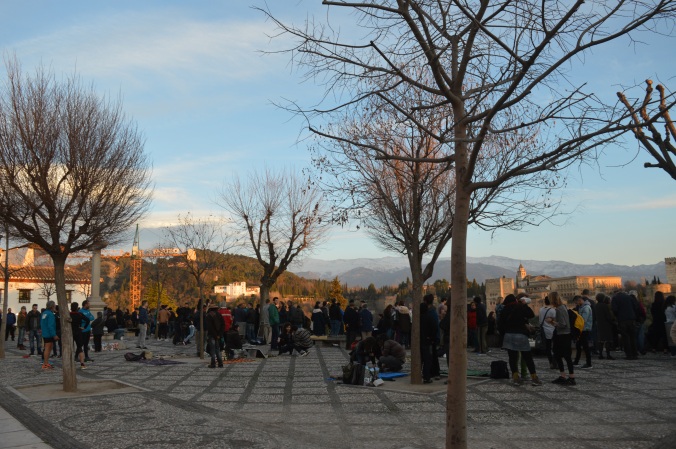 To the outsider, the presence of a gypsy troupe breaking into song and the chatter of Arabic in the crowd might seem too good to be true. There’s often flamenco up here, according to my local sources, but the Arabic is new to me – perhaps because this is the first time I’ve been in Granada since I started learning Arabic, and therefore I’m tuned to listen out for it. 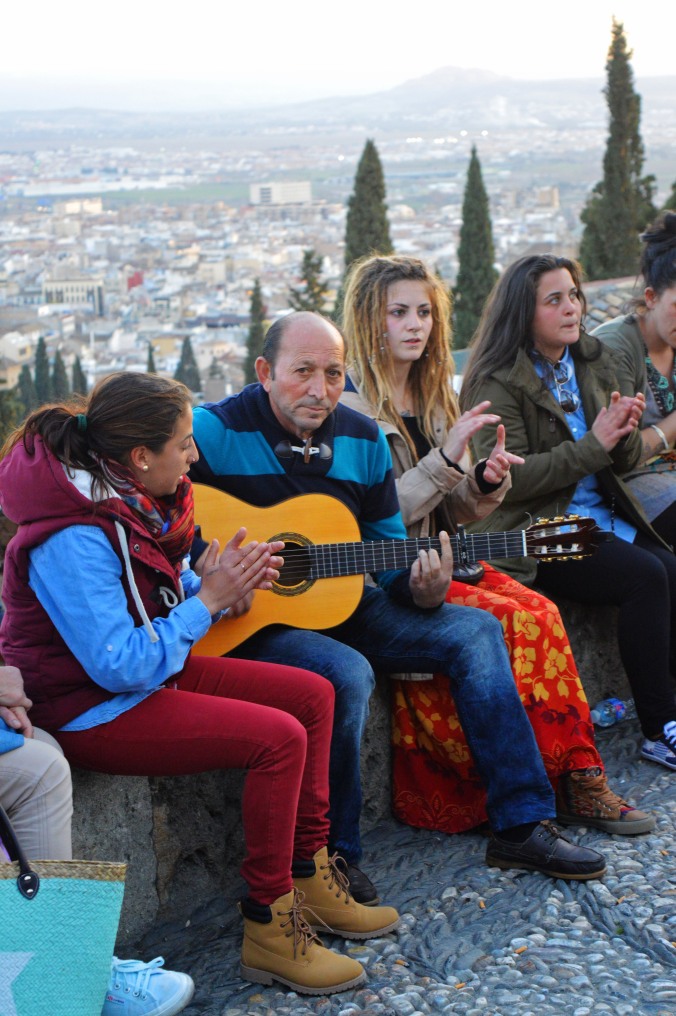 The trouble with working a British Council assistantship on your year abroad is that it royally screws over your second language. Had I more brain than heart, I would have prioritised Arabic over Spanish, being nearly fluent in the latter before I set out anyway. But it’s never that simple with yours truly, and the prospect of spending eight months and more in my grandfather’s country was just too good to turn down. That I could have gone for a similar placement in Chile, in Argentina or Ecuador but didn’t is testament to just how much I adore this country.

As a result, I’m none too confident with my Arabic right now. Oh, it’s probably still all up there, buried deep beneath my Amman angst, but I haven’t really given it much thought since I packed my bags and left Jordan last summer. Seeing the Alhambra reminded me why I chose to study it in the first place. The sad truth of the matter is that it’s not the Middle East that interests me (at least, not the contemporary one), but North Africa. The Moors. Al-Andalus. This is what drove me to study Arabic; so that I might understand this ancient world a little better. That’s why I have so much love for Morocco and why I was in such high dudgeon about being sent to Jordan last year. My heart is here, in this part of the world, and I always follow my heart. 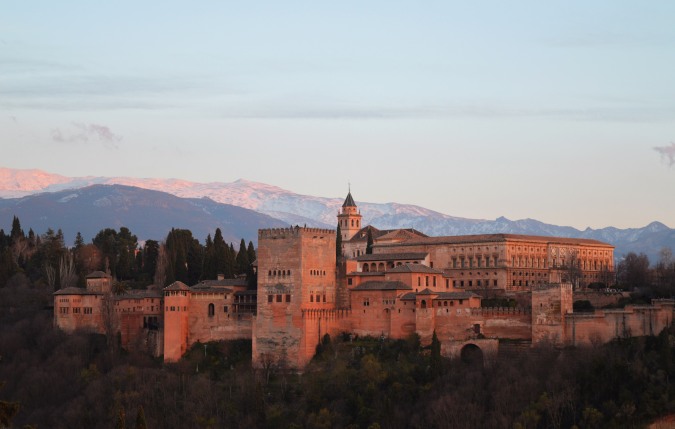 Take one look at that view and tell me I’m a fool for falling in love.

It was quite a fiddly weekend on the outset. The group gathering I’d planned on fell through straight away because one of the girls went to Seville for her best friend’s birthday, after which the others pulled out, leaving me high and dry with my hostel and ride already booked. It only dawned on me then that most of the other Durham students had already left Granada, and when my only remaining card said she’d probably be busy all weekend with a project anyway, I thought I’d have a rather lonely city break on my hands. Because, Granada being Granada, you can’t just stroll up to the Alhambra. It’s usually fully booked at least two months in advance at the weekends and on public holidays, so by the time the girls let me know they weren’t going to be there, it was far too late for a flying visit.

Understandably, I was feeling pretty let down.

Nevertheless, Fate is a most unpredictable woman, and as it turned out she dealt me a very fair hand indeed. The weather was impeccable, and I spent a gorgeous sunny morning with the albayzin – Granada’s labyrinthine Moorish quarter – pretty much to myself. I was mainly in town for inspiration and I found buckets of it. My sketchbook came back at least five or six pages more full than before, so I call that a success.

I must have spent at least two hours just sitting and sketching at Washington Irving’s feet on the garden walk up to the Alhambra, where six or seven costumed students asked me to photograph them beside the Son of the Alhambra. I think there was a treasure hunt or competition of some kind going on. I’m still not entirely sure. Saturday, I’m told, is when all the bachelor nights and hen nights take place, and these usually start in sunlight hours – visible, and often audible, at quite a distance. It could have been one of those… minus the phallic straws, of course. 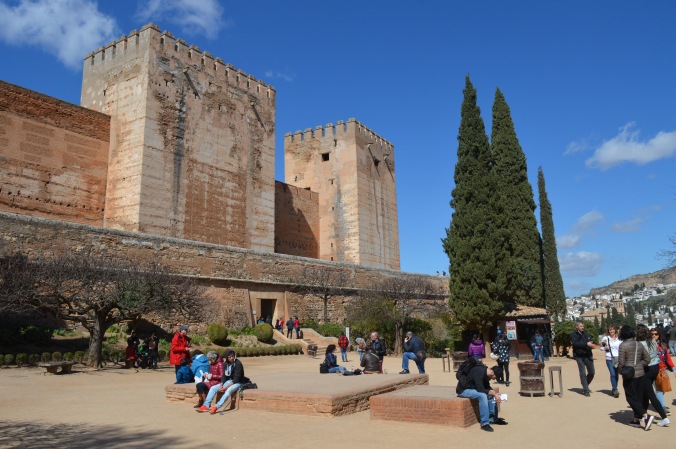 My luck turned whilst I was people-watching atop the Alcazaba and a message came pinging through, telling me that the one Durham student left in Granada had not gone to Cordoba as planned due to a heavy night on her flatmate’s account and was game for some exploration. Hallelujah for you, Violet! It was getting infuriating sitting by the Alhambra and watching the hundreds pouring in and out in the knowledge that I couldn’t get in if I tried, so it did me a world of good to be called down from the heights and back into town.

There was a loud, booming sound as I wandered back down the path which I put down to construction work, but the closer I got, the more rhythmic it sounded, until it sounded much too upbeat to be a pneumatic drill. The Plaza Nueva was packed and, at the centre, I was met with something I really hadn’t expected to find: a samba band. 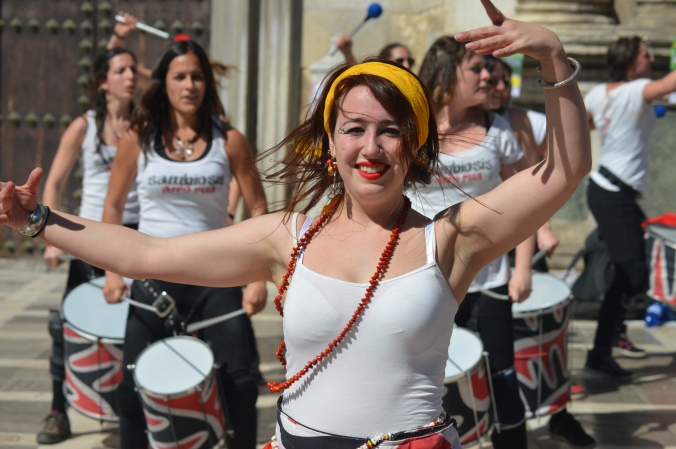 Accompanying the band was a veil-dancer, not unlike the one I saw in Caceres back in November, only this one had more of a gypsy’s flair to her style than the lithe Arabic movements of her predecessor. 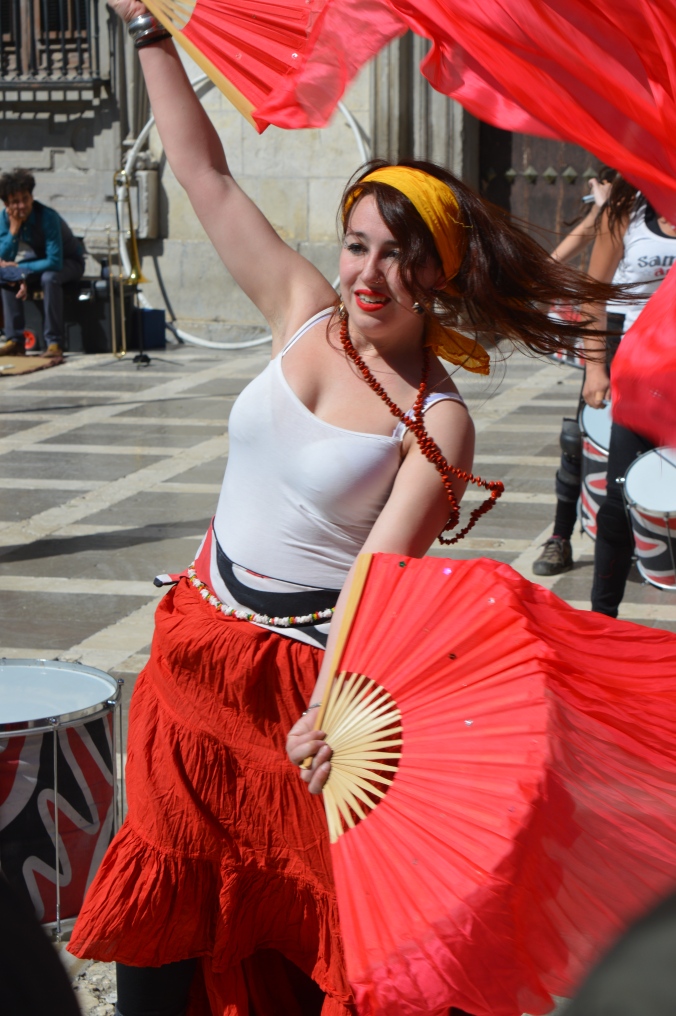 The veils this dancer wielded streamed off the blades of the twin red fans in her hands. Needless to say it was something beautiful to watch and I was mesmerized, for how long I don’t know. When you see a thing of beauty, you really have to look. 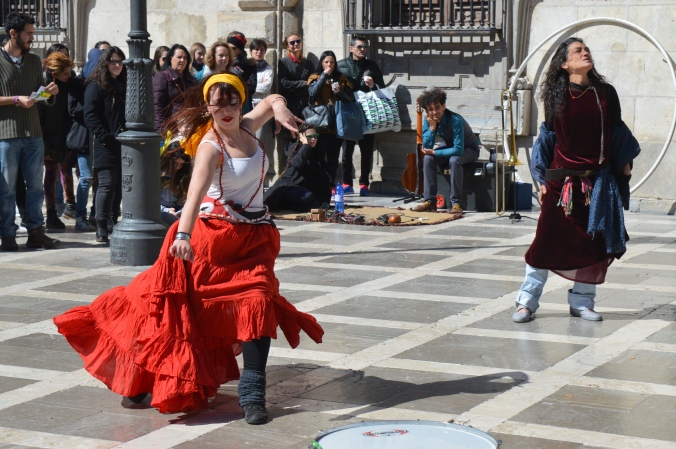 That wasn’t the only attraction in town. Barely five minutes after the samba band had packed their things and left, another street artist took their place. 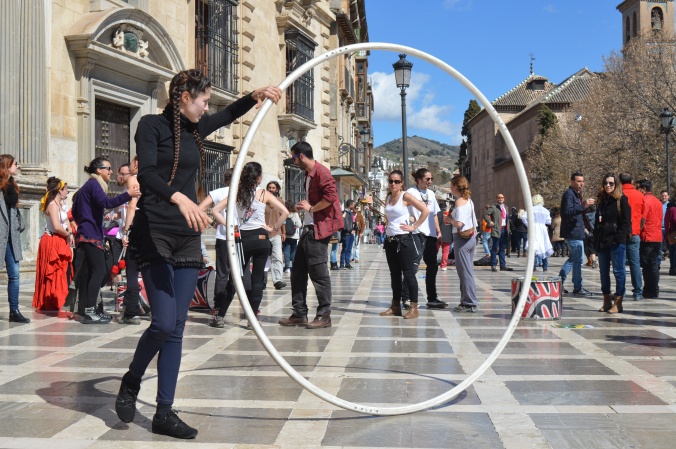 What looked quite commonplace to begin with quickly turned out to be anything but. 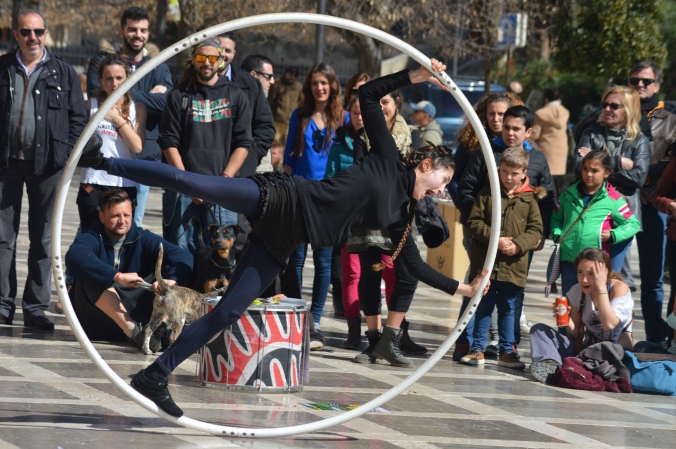 Was it acrobatics? Was it dance? Was it mime? Something of a mixture of all three, I think. The girl turned wheel after wheel about the square, casually stepping out of the hoop every so often to wiggle about for a bit before stepping in for another spin. 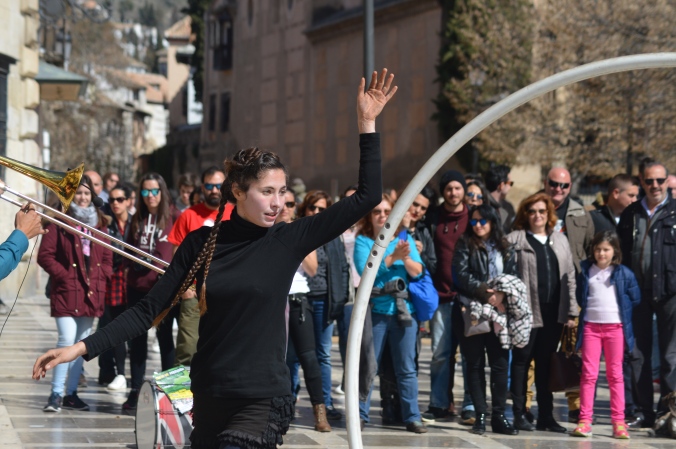 Violet’s still new to the place, but she did a fine job showing me about the place nonetheless. All I ask is good conversation and she delivered, and how. She even led us straight into a free-for-all tango, which may or may not have consisted of no staff or professionals whatsoever. It’s so hard to tell in this country, where almost everybody can dance when it comes to the crunch. 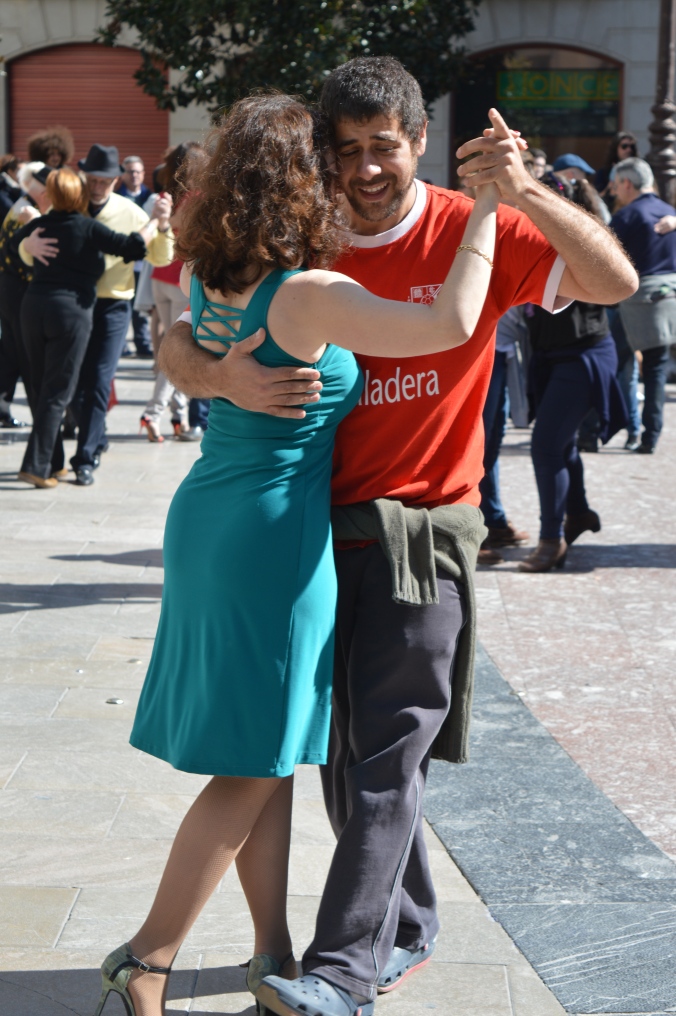 It’s really quite something to see the oldies really going for it, and practically flooring the youngsters whilst they’re at it. 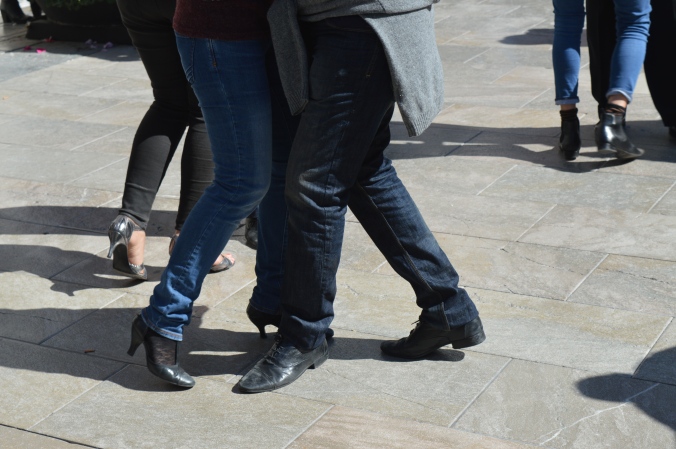 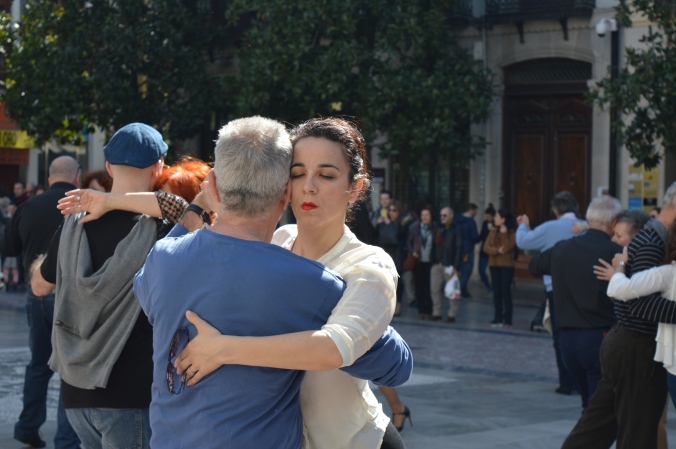 We found a decent place to tapear outside the touristic district where I made a beeline for my Achilles’ heel – croquetas – which were of a very high quality, I must say, and further story-swapping, which was of an even higher quality. I could hardly ask for more. Thanks Violet!

Now, somebody up there must have been smiling on me, because Ana, my Olvereñan friend, managed to wrap up her project for the afternoon and turned up to pick me up from lunch. Ana’s a gaditana through and through but she’s been in Granada for some time now, so she knows the place better than I ever could. She took me to a gorgeous café under the Mirador de San Nicolas with a killer view of the Alhambra. They didn’t have Arabic tea, but they did have Pakistani tea, which was a damned good substitute. And what better could I ask for: two fascinating, challenging conversations in two languages with such good company all afternoon! I’m truly spoilt. 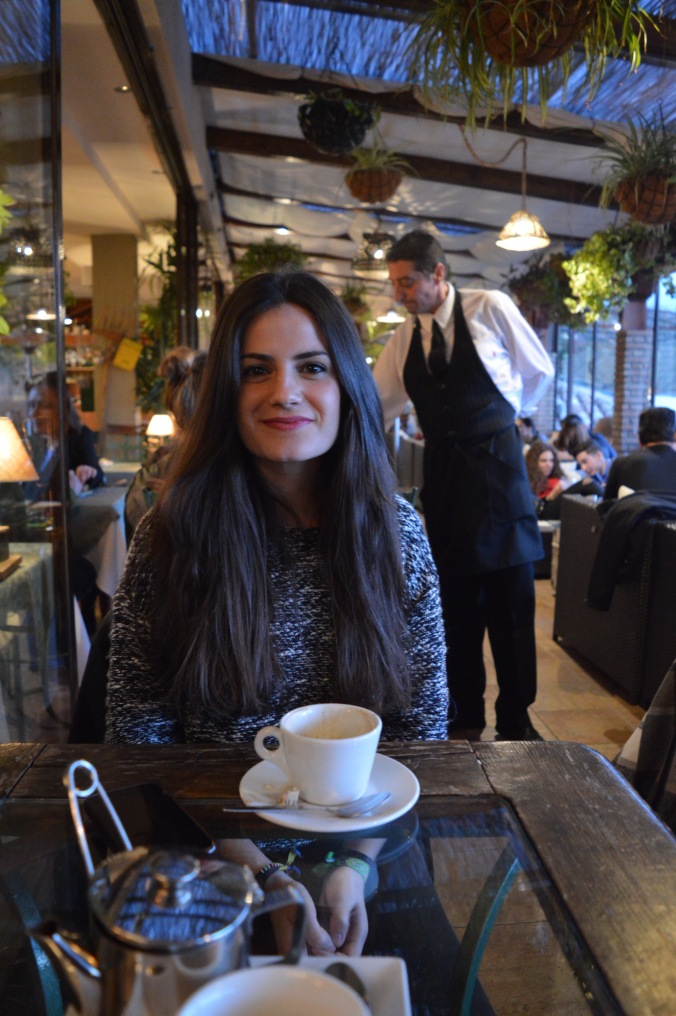 There was better to come. This is where knowing a local really comes in handy. Ana found her cousin up at the mirador and after we’d been chatting with them for a while, they left and we got their space on the wall. It’s a fiercely contested wall, for obvious reasons, and Ana and I got all of an hour with that unbeaten view as the sun set and the lights were turned on. The Alhambra looks spectacular at any time of day, but by night the snows on the mountaintop are a deep blue and the castle walls seem to glow golden in the torchlight. It’s overdone, it’s clichéd and some might say it’s even cringe-worthy, but for me, it’s nothing more and nothing less than the most beautiful building in the world.

I’ll finish off the tale in another post tomorrow. Y’all need breathing space, I think. As do I – I’ve a private class in twenty minutes and I can’t be dilly-dallying around! BB x

One thought on “Veils and Cartwheels”