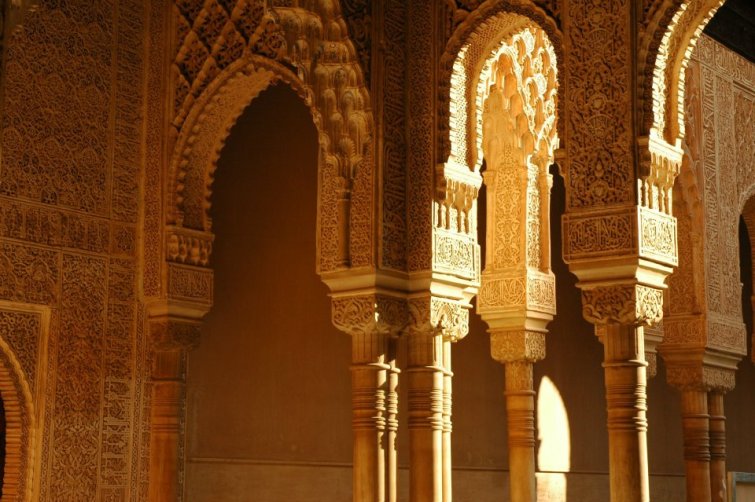 Pillars in the Court of Lions, Alhambra, Granada, Spain (2011)

Today is D-Day. Destination Day, that is. In a matter of hours (hopefully) I’ll have a province, one from either Andalucía, Extremadura or Cantabria, three equally stark, inspiring and beautiful regions of the Iberian peninsula. The BC asks you to specify which one you’d prefer and I wasted no time in putting Andalucía right at the top of the list, but I ranked ‘environment’, another of their categories, higher up the list, so it’s still anyone’s guess where I’m headed. In light of that, I’ll see if I can’t lay down my reasons for choosing each one. When I applied for university, I just went straight for Durham – twice – and filled the other four spaces with names I plucked out of the air. Not this time.

I’ve been to Cantabria twice: once on a school trip, and the second as the landing stage of my solo adventure across Spain back in ’13. Spain’s north coast is unquestionably beautiful, in a manner so very far-removed from the magic of the south. The north smacks more of Ireland, only a wilder, more impressive Ireland, where the people speak Spanish. Oh, and there are still a few bears left in the mountains – not that you’d be likely to see them. The jagged spine of the Picos de Europa rivals the Alps in magnificence – especially Picu Urriellu – in sunshine or in rain. Though speaking from experience, Cantabrian rain is not something to be trifled with. When it rains, it doesn’t just pour, it buckets it down in Biblical fashion. One of my most enduring memories of Cantabria is of sitting under the shelter of a covered well wearing several layers of plastic bags, feeling soaked to the skin and utterly miserable. But it was also a warm and friendly place and the food – especially the quesada pasiega but also the region’s black pudding, morcilla – was to-die-for. That and I feel like pulling out early because of the flood warnings has left the area ‘unfinished’ in my books. I’ll be going back someday, for sure.

Extremadura, alongside Galicia, La Rioja and Valencia, is one of the few regions I haven’t yet had the pleasure to visit. Perhaps that’s because it’s so far off the beaten track for most excursions that you’d be better off based somewhere like Andalucía to have a wide range within driving distance. But there’s no two ways about it: Extremadura is a hidden gem. Often overlooked in favour of its southern neighbour, it’s a vast stretch of rolling steppe, craggy river valleys and endless cork oak forests flooded with flowers in the spring. It’s about as rustic as you can get it, if you know where to go. Of course, it’s also about as unforgiving as the plains of La Mancha in high summer, and it has a reputation – Cortes and Pizarro were born here – but if you can look past that, you’ll understand why I’m almost hoping that my gamble with valuing environment over region will have the BC place me here. I’ve criss-crossed most of Andalucía already. Extremadura is still vast, unexplored and full of adventure.

Three people have told me now that if I should apply to Andalucía via the BC, I should be careful not to wind up in Cadiz, because of the miserable weather, the isolation and the impenetrable accent. Trouble is, I can’t help my heart. I grew up in Cadiz. The accent I can vouch for – it’s Bwindi-level impenetrable – but as far as isolation and miserable weather is concerned, that’s not the Andalucía I know and love. Far from it. If you’ll forgive me an almighty head-over-heels moment, Andalucía is and always has been the greatest love of my life. Granada and its Moorish echoes to the east. Cordoba’s flowerpot streets and the magnificence of the Gran Mezquita to the north. The godforsaken terrain of El Torcal and the Sierra de Grazalema to the south. And last but not least, the sweeping marshlands of Doñana to the west. Not to mention the enduring horse culture, flamenco, the vulture-filled blue skies and, of course, the dark-eyed beauty of the people. Andalucía has everything. Honestly, if it weren’t for Andalucía, I might have been braver and gone for a BC post in South America. But the way I see it, turning down a chance to spend another eight months in my old homeland would be one of the greatest mistakes I could make. That’s why Andalucía tops the list.

But we’ll see how things pan out, shall we? I’d better head on down to Elvet Riverside to pick up that last Arabic essay. Slightly dreading the results, since it was another late night work, my third this year, and my first genuine all-nighter. And three is, and always has been, a dangerous number. I’ll get back to you later! BB x

One thought on “Fingers Crossed”